The Diplomat author Mercy Kuo regularly engages subject-matter experts, policy practitioners, and strategic thinkers across the globe for their diverse insights into U.S. Asia policy. This conversation with Dr. Ming Xia – professor of political science at the CUNY Graduate Center and the Department of Political Science and Global Affairs, the College of Staten Island, the City University of New York – is the 287th in “The Trans-Pacific View Insight Series.”

Although the politics of sloganeering under the CPC (Communist Party of China) rule in China is nothing new, Xi Jinping has certainly pushed it to new heights. The biggest problem of this tactical use of new talk is that it has lost its freshness, because from Jiang Zemin to Hu Jintao and finally to Xi ̶ namely the third, fourth, and fifth generation of leadership ̶ all grandiose slogans have been cooked by the same author ̶ Wang Huning, who is currently ranked No. 5 in the Standing Committee of the CPC Politburo. This eminent author, without a bachelor’s degree or a doctorate, has long exhausted his creativity mainly for the following three reasons: the mounting new challenges have become more complex, the opposition elite has emerged and become more creative, and the global environment has become more inclement for the survival of the CPC exactly because COVID-19 poisoned the whole world.

“Common prosperity” promises to the Chinese an egalitarian development and a fair share of wealth, which parallels other ambitious goals from Xi Jinping: “the rejuvenation of China” serving a rich state and a strong army, “The Belt and Road Initiative” (BRI) mostly targeting the developing countries, “New Type Relationship of Great Powers” defining Sino-U.S. relations, “Human Community with a Common Destiny” intending for a tianxia [under heaven] world order led by China.

So far none of the above initiatives has shown any sign of success. Contrary to what Xi has believed – that the tailwinds are set for China’s forward movement – since he took the supreme power in the party-state in 2012-13, Xi has faced stronger and stronger headwinds punching his face and jeopardizing his ambition.

Xi Jinping and his associates understand the severity of the challenges they are facing. Xi has been reacting with whatever methods he and his advisers could think of. Xi has no grand vision, no clear blueprint. His “common prosperity” is such an example of grand social engineering. If the economy has been hitting a snag, moving to rob the rich and to spread spoils out – a trickle-down under the tight control of the party-state – certainly will continue to make the oligarchs richer and the lower echelon hungrier. This is not sustainable, because it will frighten away the rich. Pan Shiyi and Zhang Xi of Soho China are recent examples of dumping their assets and voting with their feet.

But Xi’s slogan does serve one goal: It will polarize Chinese society and turn it into a fertile ground for him to practice his political philosophy of “struggle,” a veneer for political cannibalism or the “meat grinder” power politics. The friend-enemy dichotomy advocated by German Fascist legal scholar Carl Schmitt as well as Mao Zedong has been revitalized by Xi to serve his cult of personality and personal dictatorship. No wonder the Chinese dissidents’ community gave him a moniker: Xitler.

How are Xi and the CCP using “common prosperity” to centralize power and neutralize dissent?

In his pursuit of power, Xi has navigated through a dangerous strait of Scylla and Charybdis and survived what he said “raging waves and stormy seas,” including attempted assassination. The newly released expose, “Red Roulette” by Desmond Shum, revealed that in 2008 premier Wen Jiaobao’s wife, a jeweler, arranged for Shum’s former wife, a billionaire behind Wen’s family, to have dinner with Xi and his wife, to connect them and gain a third-party appraisal on Xi. Xi Jinping understands that in Chinese politics, money has become more important in the power game of political oligarchy than before. After he had successfully controlled the supreme position of the CPC, Xi met his economic fiasco in 2015, which convinced him that a cabal of plutocrats were orchestrating an economic coup against him.

To control the purse strings became Xi’s urgent top priority and the last battle for a total control over China under him as the core of the fifth-generation leadership and the leader for life. Out of his Maoist instinct, Xi allied with the SOEs [state-owned enterprises] against the private and foreign enterprises and used “anti-corruption” as a weapon to purge his opponents and competitors (official sources say that so far more than 4 million party members and cadres have been punished or purged since Xi took full control). Through confiscating the loot and properties of corrupt officials and crooked businesspeople, Xi would harvest wealth to shore up his own power base and to make a pro-poor gesture to nurture and exploit the rising populism.

However, this is a temporary band-aid for Xi to salvage his economy and power. His populist political style and zero-sum power game have fractured the ruling elite and driven some of them into the camp of opposition elite (the real estate tycoon Ren Zhiqiang and the entrepreneur Sun Dawu, both sentenced to 18 years in jail, serve as two examples). Xi’s iron-fist policy to criminalize the civil society has driven political dissent further underground.

Compare and contrast the power politics of Mao Zedong and Xi Jinping.

Among the overseas Chinese community, a popular saying goes like this: Xi Jinping is Xi Zhongxun’s son, but Mao Zedong’s grandson. Since Xi the senior played an important role in pioneering China’s Reform and Opening, the deep disappointment about Xi among Chinese liberals is conspicuous. Xi’s new moniker, Xi Zedong, indicates some of his ideological lineage from Mao.

One important reason is that during his formative years Xi lived under the heyday of crazy Maoism. Xi has a kind of Stockholm syndrome under which he was stunted psychologically growing up, losing the chance for individuality and creativity. We can say that to some extent Xi has been relapsing back into Mao’s mode of populist governance through ceaseless political movements and campaigns.

However, Mao was Janus-faced. On the one hand, he was a revolutionary, which contributed to his charisma, especially among the oppressed and marginalized under the era of colonialism and imperialism. On the other hand, Mao was a failed governor for a gigantic continental country, and he scapegoated his own state bureaucracy for humongous natural and manmade disasters under his reign. He eventually destroyed the party-state – his own accomplishment. Mao’s governance could be divided into two periods: the first 17 years, when Mao used his state machine to impose brutal and totalitarian persecution against and control over the Chinese (such as the Land Reforms, Three Antis Movement, etc.) and the ten years of the Cultural Revolution, when he turned his personal power against the state by agitating the populace.

Clearly, Xi is not a Maoist revolutionary; he will not release the genie of populism out of the bottle and let it go amok. He is not leading China back to the Cultural Revolution. He is consolidating the repressive state establishment and has been abusing it for a continuous civil war against the Chinese, from the elite to the masses. This means that Xi has been reincarnating Mao of the 1950s, with a confident totalitarian regime.

Analyze Xi Jinping’s calculus for and the consequences of pursuing cultural re-engineering in China.

The cumulating crises of power struggle, economic austerity, social anomie, ecological and environmental degradation, and the increasingly hostile global environment have become so complex, they are beyond the comprehension of Xi and his advisors. However, China is the world’s largest nation in population, second largest GDP, and the third (or the fourth, depending upon how you count Taiwan) largest territory; that gives the largest totalitarian party in human history enough breathing room to avoid sudden death syndrome. Although this goal may be elusive, considering China is a complex system, the CPC and Xi are exactly trying to do that: They are biding time to survive.

Under the digitalized high-tech panopticon state, the Chinese, including the elites and those apolitical subjects, have felt the stronger reach and invasion of the state. The official core values strung together – Marxism-Leninism, Mao Zedong Thought, Deng Xiaoping Theory, the theory of Three Represents, the view of scientific development and Xi Jinping Thought – are the collective ethos on the surface; but can this officially-sanctioned collective consciousness vanquish both the individual unconscious and collective unconscious? The out-of-control online trolls and mockeries (either gaoji hei or diji hong, well-concealed criticisms or counterproductive, vulgar attempts at patriotism) on Chinese social media reflect the strength of the former; the burst of collective incidents (the recent nationwide protests over the Evergrande crumbling) reflect the flammable and unpredictable nature of the latter.

How should the Biden administration perceive “common prosperity” and how should it factor into U.S. China policy?

The slogan of “common prosperity” can be viewed as a piñata hung by Xi and his party-state: on the one hand, it creates a target for people to vent their anger and frustration at the rich and the venal. The so-called “rich hating” or “official hating” mentality has been manipulated by the ruling elite carefully to release the pressure within the society and to evaporate their competitors. On the other hand, a mysterious bag of gifts has the effect of mesmerizing the populace into a daydream of empire building and a millennial kingdom, just like a carrot dangling in front of a donkey can always make the animal move forward. Undoubtedly, many Chinese have been taken in, embarking upon the golden pathway to search for the Wizard of Oz.

But such wizardry can only work upon a fraction of Chinese. It can never work its magic upon all Chinese, especially close to 100 million overseas Chinese, who are connected to the Chinese within their motherland. It can be even less effective upon the global community, especially those people with freedom and enlightenment living in the liberal democracies.

The Chinese regime has tremendous capability to hurt its own people but has limited capability to launch a direct military attack upon a foreign country at this moment. However, since the Chinese decisionmakers have read Sun Tzu’s “The Art of War” and “The 36 Stratagems,” they aptly apply the stratagem of the Empty Fortress, deception in warfare in order to achieve a victory without a fight. Their performative talk often reaches the point of hamming and delusion, but it’s more for the consumption of its own people. In contrast, the American decisionmakers are more immersed in Clausewitz’s “On War,” which put an emphasis upon defensive warfare over an aggressive one. The discrepancy between the mental frameworks of the Chinese and Americans gives the Chinese side enough leeway to bully with an exaggerated passive-aggressive complex.

If American decisionmakers cannot stay cool in front of such a Beijing Opera, then, the U.S. has already lost the first psychological battle. Therefore, the Biden administration can take it easy and proceed with patience and wisdom to make democracies flourish. Other jobs will be picked up and finished by the Chinese themselves.

China’s ‘Common Prosperity’: The Maoism of Xi Jinping – The Diplomat 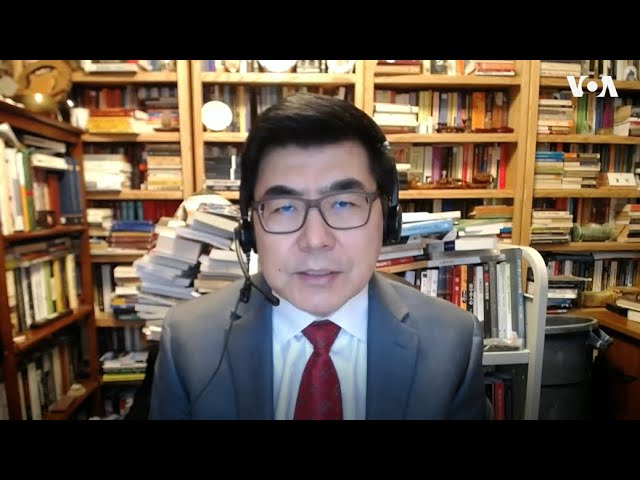